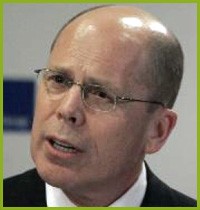 THE boss of a Donegal health insurance company pocketed an incredible 70 MILLION EURO last year in his salary.

Stephen Hemsley is the Chief Executive of the United Health Group which has a base in Letterkenny.

The American-based boss made a whopping €5.83M every month!

The figure makes him the best paid chief of any company, according to American magazine Forbes.

UnitedHealth group, which is based in Minneapolis, is a Fortune 100 company with operations in 63 locations worldwide.

It currently employs 340 people at its Letterkenny site processing medical claims and working as IT technicians.

At the time of the extra jobs announcement, US Vice-President of Operations, Jim Becker, said it was ‘a proud day’ for the Group.

‘The Letterkenny facility stood out for us,” he said.

‘Their unquestionable ability to succeed each and every day, along with their strategic location and passionate workforce made our decision very easy.”