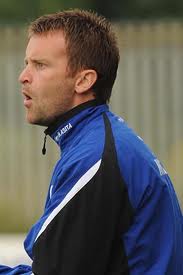 A statement from the club issued at 10am said that Gallagher and his assistant Anthony Gorman have parted company “with immediate effect.”

The chairman and the board of directors thanked both men for their efforts and commitment to the club.

And the statement continued “The Board will begin a recruitment process immediately to identify suitable candidates and appoint a new manager.”

The Ballybofey club finally lost patience with Gallagher after his side slumped to their third defeat in seven days after being beaten 2-1 by Longford Town at Finn Park.

Longford Town showed no mercy as they inflicted a fourth league defeat on Harps who are struggling all over the park.

First half goals from Jacques Morley and Austin Skelly helped the Flancare Park outfit pick up their fifth win of the season and consign Harps to their third defeat in seven days.