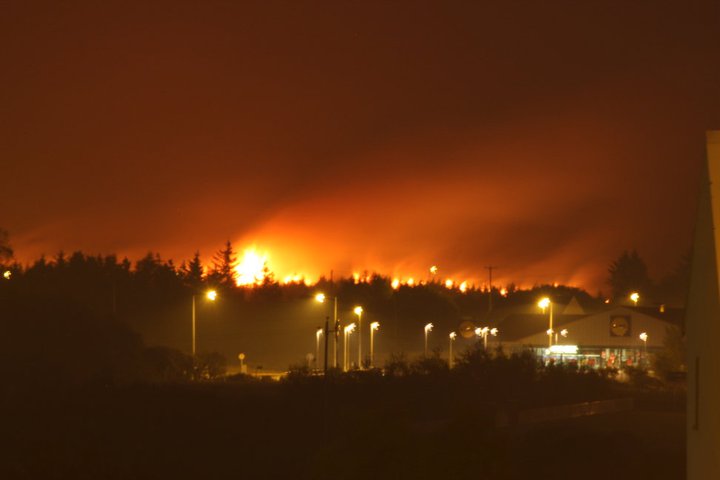 1AM UPDATE: ARMY SENDS IN TROOPS AND CHOPPERS AS GORSE FIRE THREATENS DUNGLOE

The Army have now been drafted in to battle gorse fires across Donegal with 25 troops and three army helicopters now taking part in the mission.

The troops will assist more than 100 firefighters who are battling to put out the savage fires across various locations in the county.

The most serious fire is on the soutskirts of Dungloe with the flames now coming dangerously close to the town.

The army helicopters are making dozens of runs to nearby lakes to lift water in an attempt to quell the fire but it is only having some impact on the blaze.

Already thousands of acres of gorse and forestry have been burned around Dungloe, Lettermacarward and Doochery since the fire started yesterday.

There are also serious fires round Fanad with hundreds of acres scorched there too as firefighters try to keep that blaze under control.

Exhausted firefighters are now out at the scene for more than 24 hours at the blaze at the general Upper Rosses area.

At midnight another fire broke out at Thorr near Crolly.

Pat the Cope Gallagher earlier called for Minister for Defence Alan Shatter to draft in the army.

A number of families have already been evacuated from homes across the region as more than 100 firefighters tackle the blaze.

A spokesman for the fire service said they now believe the blaze was started deliberately.

At least one property is believed to have been destroyed already but there are no reports of any casualties.

Acting chief fire officer Bobby McMenamin said they are tackling the blaze as best they can.

“It’s a huge challenge and out resources are stretched to the limit. Our men have been flat out but we are operating with limited resources.

“This is a huge fire which got worse overnight and we have a very long day ahead of us to get it under control,” he said.

Hundreds of locals have also been working throughout the night to protect their properties and to assist in trying to put out the fire.

Motorists are also being advised to avoid the area at all costs, especially the N56, which is covered in dense smoke.

A lot of wildlife is also believed to have perished during the blaze.

Local politician Pat The Cope Gallagher described the blaze as “an inferno.”

“What’s needed now is hundreds of army personnel who can protect homes and supplement fire personnel and help to protect property and hopefully put out this fire.

“It is not an exaggeration to call it an inferno. It has gone completely out of control now and it needs to be contained,” he said.

1AM UPDATE: ARMY SENDS IN TROOPS AND CHOPPERS AS GORSE FIRE THREATENS DUNGLOE was last modified: May 2nd, 2011 by Stephen Maguire