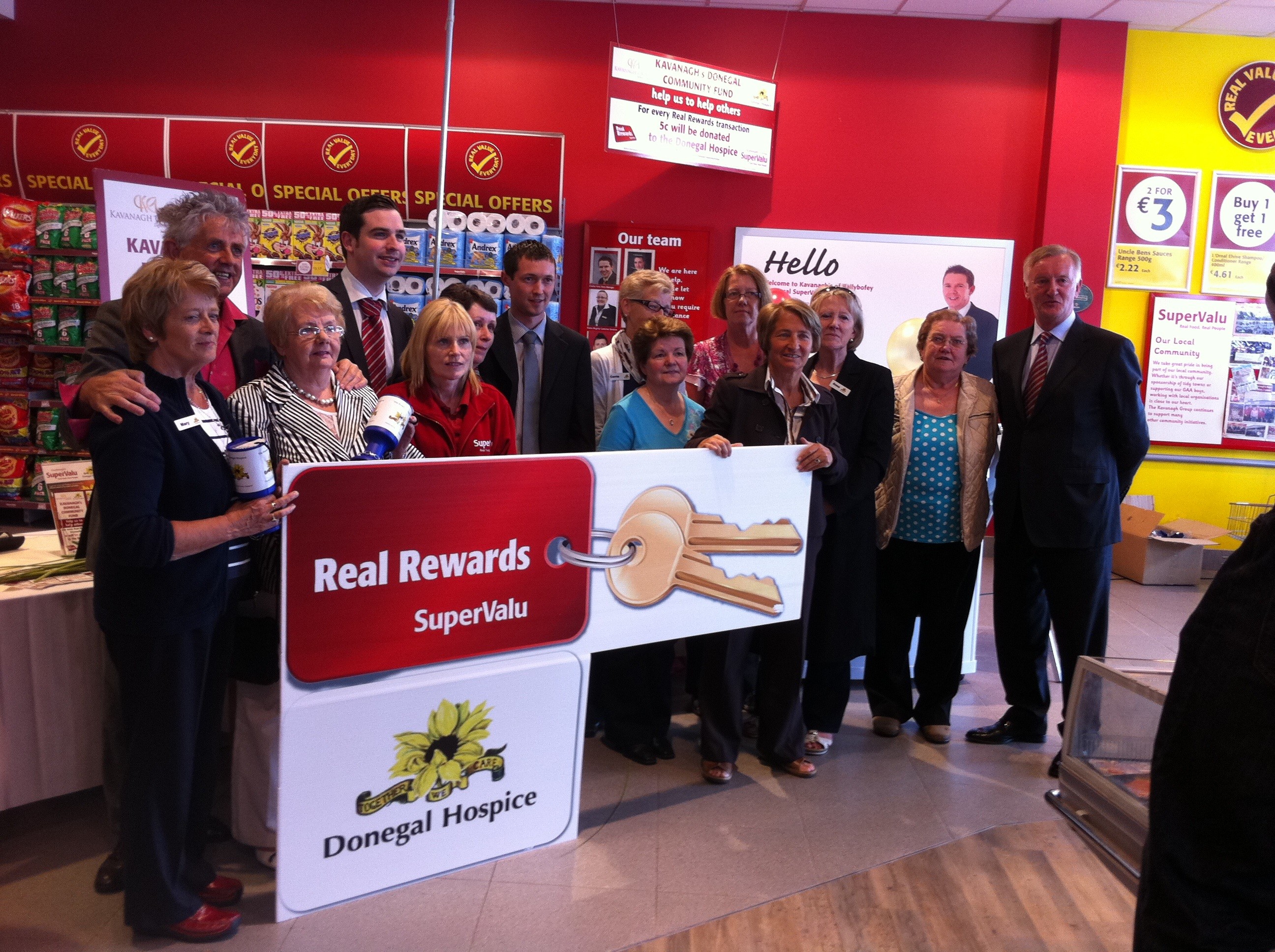 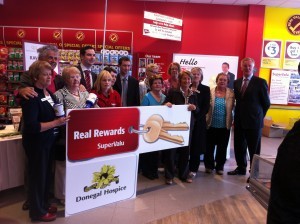 Representatives from Donegal Hospice, Kavanagh's SuperValu Donegal Town, Ballybofey, Dungloe and Buncrana along with TV3 presenter Noel Cunningham at the launch of the "Help Us to Help Others" campaign which commits to raising 30,000 euro for the Donegal Hospice over the next 6 months

Kavanagh’s SuperValu have shown they are ‘Real People’- and have committed to raising €30,000 minimum for the Donegal Hospice.

The company with the motto ‘Real Food, Real People’ has launched a campaign entitled “Help Us to Help Others” and will run from now until October 22.

With four SuperValu stores throughout Donegal, in Ballybofey, Buncrana, Donegal Town and Dungloe, the Kavanagh Group will give a 5c to the Donegal Hospice with every Real Rewards transaction made throughout each store from May 6th 2011 until October 22nd 2011.

The official launch of the “Help Us Help Others” fundraising campaign took place this afternoon in SuperValu Ballybofey with Noel Cunningham, TV3’s Showbiz reporter making a special guest appearance, and he was met by a massive turn out of customers in the store.

Speaking at the event, Noel Kavanagh, Managing Director of Kavanagh’s SuperValu said: “We are delighted to be able to help the Donegal Hospice supporting them in their great work.

“With our four stores located in the four corners of Donegal we are well connected with members of the local community and so believe we were well placed to maximize our fundraising potential.”

Store Manager of SuperValu Ballybofey, Charlie Ferry who along with his other store managers and staff are committed to matching the funds raised through real rewards by undertaking fundraising events said: “We employ up to 350 people throughout Donegal and have a commitment to supporting local producers.

“This fundraising campaign idea came about as a result of our ongoing fundraising activities but we wanted to partner with one Donegal-based charity and have a significant impact on that charity and their work.

“After much consideration and research we decided to approach the Donegal Hospice as it is a countywide charity and they are very much a local organisation. We also felt it was a charity that people including our customers could identify with.”

The Donegal Hospice opened in Knocknamona, Letterkenny in 2003 and is now a well-established high quality service for people in Co. Donegal who require palliative and terminal care.

The Health Service Executive (HSE) is responsible for the day-to-day running of the hospice, and the hospice support movement works in partnership with the HSE.

The support group, Donegal Hospice Ltd, is responsible for providing up to 20% of the annual running cost of the facility and this is a challenge every year.

Grace Boyle, Chairperson the Donegal Hospice “The Hospice Committee must raise up to €600,000 every year so this campaign launched by Kavanagh’s SuperValu will be invaluable in helping us reach that target. They are giving so much back to Donegal and they are helping us raise €30,000 and I’d really like to thank them for this opportunity.”