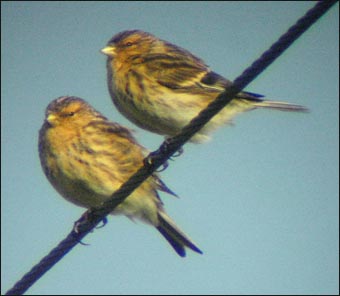 FEARS FOR CUCKOO AND TWITE AFTER GORSE FIRES – EXPERT

TWO of Donegal’s rarest birds have suffered as a result of recent gorse fires, a top ornithologist said today.

The twite and the cuckoo are already struggling to survive in the county.

The twite, a member of the finch family, is already on the verge of extinction, with just 100 breeding pairs reported to be in the whole country last year.

The bird’s ideal habitat is heather and gorse, and its main breeding grounds are here in County Donegal and in parts of County Mayo and Co Donegal.

Scrubland is vital to the well-being of this bird. Without a plentiful supply of scrub and subsequently the cover and array of seed and other food sources which it provides, the outlook for the species is now even more uncertain.

Birdwatch Ireland expert Niall Hatch said: “The scrub is not just an important source of for food for the twite, it is also needed for protection and defence against potential threats. The twite uses the scrub as a shelter. The vulnerable chicks are free to forage for food undisturbed. “The removal of this cover is very serious.

“Birds like the stonechat and the whitethroat will also have been very badly affected. The gorse is their ideal territory and that will pose significant problems. They will have lost their first clutch of eggs and they won’t get the opportunity to nest again. The gorse itself can bounce back, but birds, butterflies, moths, plants and vegetation can take years.”

Hatch said the cuckoo, another species accustomed to thriving in the terrains of the bogland and moorland, is suffering badly.

“The cuckoo relies on the nests of other birds,” he said.

“The already-low cuckoo numbers will now be under considerable threat as a result of the gorse fires.”

FEARS FOR CUCKOO AND TWITE AFTER GORSE FIRES – EXPERT was last modified: May 10th, 2011 by admin