MCGARVEY BROTHERS ‘WRITE’ A NOTE IN THEIR DIARY FOR TV DOCUMENTARY

We all know they’re made of the ‘write’ stuff but now the young McGarvey brothers have gone international! 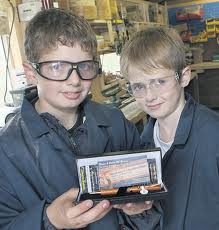 Brothers Ronan and Conor from Loughanure have already built up a fine reputation for their fledgling business Donegal Pens.

The pens, which are made from recycled wood, are owned by everybody from Daniel O’Donnell to Gerry Adams.

But now the word is spreading across the world as a French/German television crew arrive in the county to film the lads for a television documentary.

The crew from the television channel ARTE and ZDF will spend next Tuesday, May 17th chatting to the lads abut their remarkable true-life success story.

The crew is compiling a five-part series on Ireland, each programme 45 minutes in length, and they selected the young brothers for one of the five slots.

The ‘Discovery’ programme is expected to be aired on the ARTE and ZDF networks later this year.

Programme producer Heiko De Groot said he has read about the Donegal Pen entrepreneurship, the small production facilities and the effort they put into the crafting and wants to feature them in the series.

Proud dad Eoin McGarvey said “It’s great for the lads but they’re fairly laid back about the whole thing. I think I’m more excited than they are.”

MCGARVEY BROTHERS ‘WRITE’ A NOTE IN THEIR DIARY FOR TV DOCUMENTARY was last modified: May 10th, 2011 by Stephen Maguire