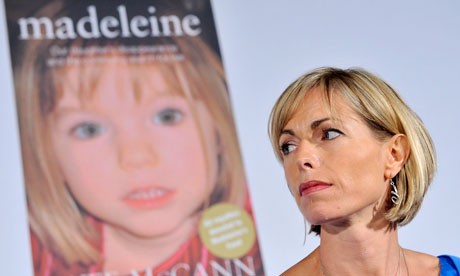 The Metropolitan Police in Britain are to “bring their expertise” to the search for Madeleine McCann, it has been announced.

Madeleine went missing aged three on holiday in Portugal in May 2007.

Downing Street said David Cameron had written to the McCanns to tell them that Scotland Yard had been asked to “cast a fresh eye” over evidence.

Gerry McCann, whose family is from St Johnston, said he and his wife Kate welcomed the news, which came after they asked British PM Cameron to launch a review of the case.

In a statement they said: “We welcome the government’s response. This is clearly a step in the right direction.

“The expertise of the Metropolitan Police is renowned and we are reassured by our government’s commitment to the search for Madeleine.”

A Home Office spokesman said the government hoped the Metropolitan Police Service (MPS) would be able to “bring a new perspective” to the case, adding that the Home Office would be providing “the necessary financial support”.

He went on to say that the government’s primary concern had always been the safe return of Madeleine.

“Although she disappeared in Portugal, and the Portuguese retain the lead responsibility in the case, law enforcement agencies here have continued to follow up leads and pass information to the Portuguese authorities as appropriate.

“The prime minister and the home secretary have today agreed with (Met Police commissioner) Sir Paul Stephenson that the Metropolitan Police will bring its particular expertise to this case.

“Clearly, the detail of what that will entail will be a matter of operational judgement and it would not be appropriate to discuss at this stage,” he said.

Yesterday Kate McCann launched her book – Madeleine. It is a bid to highlight the case and raise money towards finding her daughter.

Based on the daily diary she has kept since Madeleine vanished, the book records her initial reaction to the chilling discovery, on 3 May 2007, that their daughter’s bed was empty. “Nausea, terror, disbelief, fear, icy fear, dear God. Life without Madeleine had begun,” she writes.

However Kate insists: “There is no evidence at all that she has come to any harm.”

She continues to believe Madeleine is alive and they will be reunited one day. “Madeleine is everywhere, she is with us all the time,” Kate told one interviewer. “Only yesterday Sean and Amelie were asking ‘How tall is Madeleine now?”

WE BELIEVE MADELEINE IS ALIVE, SAY PARENTS, AS BRITISH COPS OPEN NEW INQUIRY was last modified: May 13th, 2011 by admin