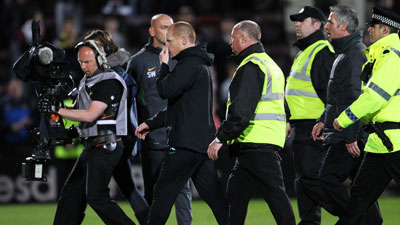 Two men in their 40s have been remanded in custody in connection with parcel bombs sent to Celtic manager Neil Lennon and high profile supporters of the Hoops.

Neil McKenzie, 41, and Trevor Muirhead, 43, both from Ayrshire, made no plea or declaration when they appeared in private session at Kilmarnock Sheriff Court.

The pair were arrested on Thursday and charged with three counts of dispatching a package containing explosive substances. They also face two charges of dispatching a hoax bomb under the Criminal Law Act of 1977.

Suspect packages were sent to Lennon and one each to lawyer Paul McBride QC and former MSP Trish Godman.

A fifth suspect package, addressed to the offices of a pro-Sinn Fein group in Glasgow Cairde Na H’Eireann.

A bullet was sent to Lennon at Parkhead on Thursday but police say a separate investigation is underway into that incident.

Thursday’s arrests came on the same day that a man appeared in court charged with assault on the Celtic manager at Hearts on Wednesday.

Lennon is trying to focus his team on this Sunday when they need to beat Motherwell at home and hope Rangers drop points away at Kilmarnock.

However he didn’t appear at a pre-match press conference.

Assistant Johan Mjallby said of Neil: “He is in a good mood but obviously he wants the team to be the main focus because they have been performing very well lately, especially on Wednesday, we were brilliant.

“And now we want to focus on the last two competitive games of the season, two very important ones.”

Mjallby was asked why Lennon is hated by religious bigots.

“He has always been in the spotlight as a player and now even more so as a manager. It seems that some people think he is a provocative figure which he is not.

“In a strange way he seems to upset people and there’s probably not much he can do. But those who are closest to him believe in him and think he is a great guy.

“He is a winner and his will to win and compete is second to none.”