written by Stephen Maguire May 17, 2011
FacebookTweetLinkedInPrint 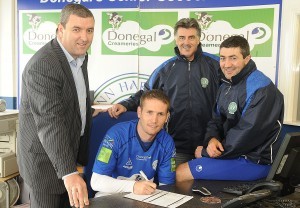 Finn Harps have completed the signing of full-back JP Gallagher from Irish League side Dungannon Swifts.

Finn Harps would like to place on record their thanks to JP’s employers, PK Wholesales from Strabane, for allowing the player leave to link up with the squad on matchdays.

Harps remain rooted to the bottom of the First Division after the first seris of matches in the league.