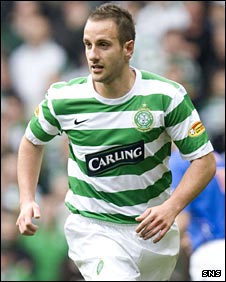 It follows a disrupted testimonial match against Finn Harps in March when Lennon and several senior players failed to travel to Donegal due to security fears at that time.

Now this Sunday’s match, which was to feature the current first team playing against members of the Celtic side that reached the 2003 Uefa Cup final under Martin O’Neill, has been postponed due to continuing security fears.

Fans from Donegal due to travel to the match were told today that a new date for the game has not yet been agreed.

Kennedy was forced to retire in 2006 because of a persistent knee injury.

He picked up the cruciate ligament injury while playing for Scotland against Romania but was forced to give up the game after a series of operations and attempted comebacks.

The match in his honour was due to take place the day after the Scottish Cup final against Motherwell.

But the testimonial committee felt it would be inappropriate to play the game following a turbulent few months for their manager.

Lennon has been targeted with bombs and bullets by loyalist bigots.

A representative of the John Kenney testimonial committee told Celtic’s official website in the past hour: “The committee is very sensitive to everything that has gone on around the club and, in particular, the manager in recent weeks.

“Therefore, we felt it would be best to reschedule the match for a more appropriate time.

“We thank the many supporters who have already committed to the game and sincerely apologise for any inconvenience. Please be assured the club will provide full refunds.

“We hope the Celtic support will understand this was a difficult decision, but we feel it’s the correct one for all concerned in the current circumstances.

“We look forward to announcing the new details in due course and staging the match when we can celebrate the great contribution to Celtic made by John Kennedy, Martin O’Neill and a host of Celtic legends.”