written by admin May 21, 2011
Facebook0Tweet0LinkedIn0Print0

Celtic forgot about their disappointment at not winning the league after easily brushing aside Motherwell 3-0 to win the Scottish Cup.

It’s the club’s first trophy since 2009 and Neil Lennon’s first as manager.

Goals from Ki Sung-Yeung, Charlie Mulgrew and an own goal by Motherwell captain Stephen Craigon gave Celtic the silverware.

“We’ve had a great season and fell short in the championship, but this is a fitting end,” said Lennon

“I’m delighted for everyone associated with the club. It’s an important day. The performance today merited it.”

A sensational 32nd minute strike from Ki Sung-Yeung was enhanced by Mark Wilson’s deflected shot and an inch-perfect Charlie Mulgrew free-kick five minutes from full-time to hand Lennon his first silverware in charge of Celtic.

The Co Armagh man was proud to claim a trophy in his debut season, despite the disappointment of narrowly losing out on the league championship to Rangers last week.

“It’s the first trophy for a few years and the players deserve it – so do the supporters,” said Lennon.

“Motherwell did very well and made a great contribution to the final, but we were superb.

“We were a bit too clinical at times and tried to walk the ball into the net at times.

“You can’t deny the quality in the squad, and it manifested itself again today.”

A turbulent season for Lennon was rounded off with the news from the club’s majority shareholder, Dermot Desmond, that a long-term contract would be forthcoming in the next few days.

“I hope so,” said Lennon. “It’s a great privilege and Mr Desmond has been very good to me in my time as manager so far.

“Even in my time as a player, he gave me great counsel throughout the season.

“For all Celtic supporters out there, he’s a huge Celtic fan and he has the best interests of the club at heart.

“He was as disappointed as anyone with the way the season ended, so I hope he’s enjoyed himself today.” 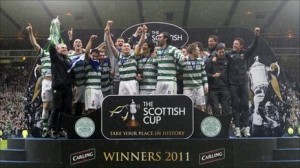 Celtic’s squad were also praised by Lennon and he pledged to bolster the playing staff and maintain a free-flowing style of play next season.

“We love the game, we try to entertain and we try to win with a bit of style,” said Lennon.

“It doesn’t always get you over the line – but if we keep playing and strengthening the squad in a few areas, we’re not too far away from having a very good team.

“We’ll sit down and look at some options and identify players – whether we get them or not is another thing.

“But the players we’ve brought in are great – they’ve all made a huge contribution to the season.”