Peter McFadden scored an injury time winner to help St Michael’s draw first blood against McCumhaills in the first round of the Senior Reserve Championship at Ballybofey. 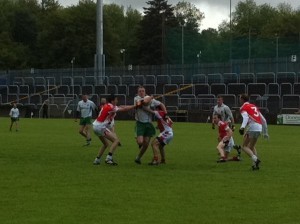 The game was played in terrible conditions putting a dampener on any hope of a decent game between these two sides.

The game looked like it was heading to a 0-5 to 0-5 stalemate until McFadden popped up with just seconds to go to kick the winner.