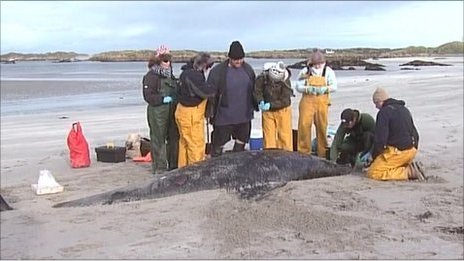 Marine experts are monitoring a pod of 60 pilot whales that came close to a mass stranding off the north-west Scottish coast, hoping there isn’t a repeat of the mass deaths on Rutland Island last November.

The whale pod, which on Thursday swam into Loch Carnan, a small remote sea loch on South Uist, had, according to members of the British Divers Marine Life Rescue yesterday, moved out of the shallows and into open water, heading south down the coast.

Fearing the animals could swim back into the loch, measures were being taken to avoid a repeat of last November’s tragedy, when 33 long-finned pilot whales swam close to the same island and died three weeks later after a mass stranding off the coast of Donegal.

“One theory is that they are arriving here in search of food,” said Dave Jarvis of the BDMLR, as news broke that the whales were finally returning to the Atlantic.

“But it is becoming increasingly a concern, especially in the wake of what happened in Ireland. We will be careful to ensure that history does not repeat itself.”

Rescuers remain on standby with inflatable pontoons, in case any of the whales should break away from the group. Local fishermen also helped to guide the whales back into deeper water.

Dave Jarvis said: “The Scottish government has offered the use of the fisheries protection vessel EPV Hirta to shadow the animals’ movements, and this offer has been accepted. The boat is expected in the area within the next few hours.”

But he added: “The remainder of the coastline is predominantly rocky, with numerous inlets and bays. These present a separate set of dangers to the creatures.”

Some of the whales have wounds, thought to have been sustained when they struck the shoreline.

“We believe around 20 of these whales have severe head injuries, but at this stage we aren’t sure of the cause,” said Mr Jarvis. “One possibility is that these injuries were sustained during a previous attempt to strand themselves.”

SCIENTISTS MONITOR WHALES AS REPEAT OF DONEGAL DISASTER IS AVOIDED – FOR NOW was last modified: May 22nd, 2011 by admin