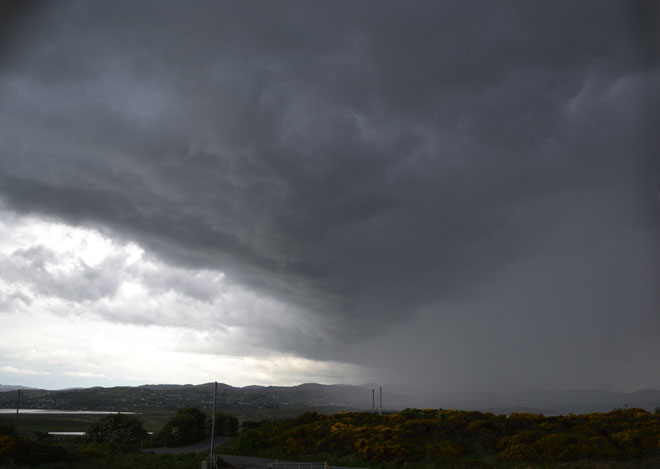 A serious weather warning has been issued for Donegal for later today and tomorrow, with damaging winds of up to 80 miles per hour being predicted.

The so-called ‘amber’ warning came from the UK Met Office earlier today and is now being repeated by Met Eireann.

And a spokesman for Irish Weather Online says the storm will be more like something from January – not late May!

Said the spokesman: “It will become very stormy over the next 48 hours, especially later Sunday night and Monday. A potent storm center of around 980 hPa will develop and pass to the north of Ireland, bringing with it extremely strong winds and heavy rain, most severe in northern and western parts.

“Sustained winds of up to Storm Force 10, with stronger gusts, will affect the northwest during Monday, but the rest of the country will not escape, with gales affecting most coastal areas.

“With trees now in full leaf, there is a greater chance of them falling now than with a winter storm, as the force of the wind acts on a larger total surface area of the tree.

“It would be prudent to also make sure that bbqs and other garden furniture are secured in advance or you may come home to find them in the neighbour’s garden, or further afield!”

Last night the massive storm was building off the coast of Newfoundland in Canada.

Much of Ulster and Connaught will feel these winds early Monday morning, with the strongest winds in Donegal and Derry later in the day.

The website spokesman added: “Flights at Donegal, Sligo and Derry Airports will most likely be affected, so intending passengers should be on the alert for disruption.”

* Send us your weather pictures to info@donegaldaily.com

SEVERE WEATHER WARNING AS STORM SET TO BATTER DONEGAL was last modified: May 23rd, 2011 by admin