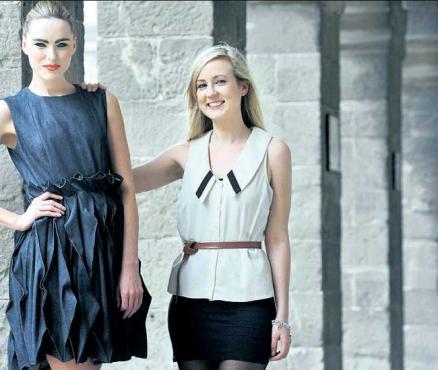 LETTERKENNY student Clarisse Walsh is the toast of the Irish fashion world after scooping one of the industry’s top prizes.

NCAD’s 15 fourth-year fashion degree students were challenged to create a denim piece for the bursary competition.

And Clarisse’s design came out on tops in front of a star-studded audience at the Royal Hospital Kilmainham for the Peter Mark NCAD Graduate Fashion Show.

The highly sought-after prize includes €3,000 and a paid, three-month internship at the River Island design department in London.

Clarisse, 22 and a former student at Loreto, told donegaldaily.com: “The dress was based on cut glass and crystal and I used a 3D folding technique to recreate the forms of the glass.

“I’m really excited to be doing an internship with River Island and getting a great insight into the industry.”

Thanks to Clarisse, the county is getting something of a name in the fashion industry.

Last year’s bursary was won by Sile O’Shea from Pettigo.

Clarisse follows in the footsteps of fellow countywoman, Sile O’Shea, from Pettigo, who won the bursary last year

Clarisse’s win was announced in front of more than 800 guests and was attended by many fashion figures.

Style icons Peter O’Brien, Mairead Whisker and Joanne Hynes showed their support for young Irish talent by attending the show, which featured over 200 designs on the catwalk.

A host of top models took to the catwalk for the event including Karen Fitzpatrick, Sarah Morrissey, Yomiko and Gordon D’Arcy’s partner Aoife Cogan.