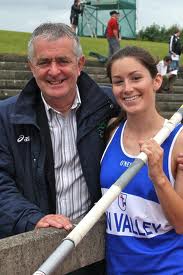 Letterkenny AC’s Darren McBrearty will run in the 800 metres in what has been a superb season so far.

Tir Chonaill AC’s Mary McLoone will compete for Ireland in the triple jump.

And Finn Valley’s Tori Pena will represent her country in the pole vault.

City of Derry’s impressive Jason Smyth will run in the 100 metres.

After successfully hosting the Summer Universiade and group matches during the World Basketball Championship last summer, the Turkish city of İzmir is ready to roll for this giant sporting event: the European Team Championships First League athletics meeting.

The championship will take place between June 18-19 in the Aegean city with the participation of 12 countries: Turkey, Finland, Belgium, the Netherlands, Croatia, Ireland, Hungary, Switzerland, Romania, Norway, Greece and Slovenia. The teams will compete to earn a promotion for the Super League.