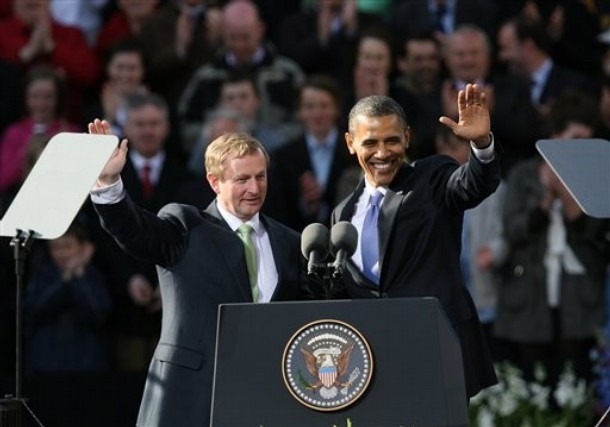 ONE of the country’s smallest primary schools is invoking the message of US President Barack Obama to make the case for its survival.

The decline in enrolement will result in the school, which once boasted numbers in excess of 100, losing one of its two teachers at the end of this school year.

This will edge it ever closer to permanent closure against a backdrop of and ongoing Value for Money Review of small primary schools by the Department of Education and Science.

But parents, principal and Board of Management at the tiny school in the Derryveagh mountains, argue passionately that the estimated €30,000 savings from the closures of such schools was nothing compared to the loss it would represent to the Gaeltacht community.

“It is a small school and I can see that people are trying to save money.

“But Barack Obama when he was here spoke about our identity and looking after our heritage and not forgetting it,” said parish priest and chairman of the Board of Management, Nigel O’ Gallachoir.

“This school is one of the jewels of the Rosses Parish. It is unique in the sense that it is 100 per cent ‘as Gaeilge’. The teaching is wonderful. The children are literally getting a one to one education.

“They have all the technology they could ever want and yet it still is immersed in the old tradition.

“It would be awful to lose that link,” he said.

He added that rather than lose such a resource, the Department should consider providing transport from other areas where classes are overcrowded.

The McCarthy recommendation for the amalgamation of the 600 or so schools with enrolment of 50 pupils or less, estimated €18 million, has prompted the Value for Money Review.

But Minister, Ruairi Quinn has emphasised that the study, due to be completed at the end of the year, is simply about ascertaining the facts to inform future decisions and no policy decision has been taken.

Parents of the pupils at Scoil Mhin na Manrach, fear, however that the threat of closure is stopping other parents sending their children there.

Noreen Ni Dhomhnaill, whose seven-year-old daughter Sara is the fourth of her children to attend the school, said that the education on offer is second to none.

“They are so advantaged in every subject. Their Irish is perfect and I think they get very grounded here. They get such individual attention that it really helps them later on,” she said.

Seven year old German twins, Nele and Tanya Ni Shimoin, who moved to the area five years ago, speak English with a German accent but their Irish has the lilting fluency of a native Gaeltacht child.

Their mum, Cora, who learns Irish at evening classes in the school said she is delighted with her daughters’ multilingualism.

The parents have held open days for local play groups to try to encourage other parents to send their children there so the school can remain open.

Principal Bernadette Ni Dhuibhir pointed out that the school had undergone a €250,000 renovation programme just three years ago and has five part time staff.

“Our argument is that we should be preserved because we are such a strong Irish teaching school,” she said.

WEST DONEGAL SCHOOL USING THE MESSAGE OF BARACK OBAMA TO SURVIVE was last modified: May 30th, 2011 by Stephen Maguire