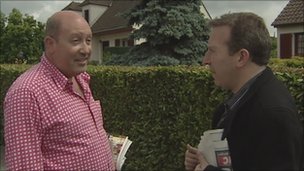 THE MAN exposed as a crook by donegaldaily.com was JAILED three times, it was revealed tonight.

Conman Francois de Dietrich fleeced 220 Donegal people out of tens of millions of euros – and 200 others around Ireland.

But his crimewave was brought to an end when donegaldaily lifted the lid on how he tricked unsuspecting victims into parting with their cash.

The French crook ran a series of legitimate businesses from his base in Ballybofey.

But behind the front was a sophisticated con job – where people handed over their money in return for promises of returns of up to 40%.

Tonight donegaldaily can reveal that conman De Dietrich was jailed three times in his native France for previous frauds.

He even ripped off his own brother – and was banned from being involved in business by the French authorities for 30 years!

Living openly in France, de Dietrich was involved in money laundering for criminals.

Confronted by the BBC in northern France, the conman refused to answer any questions.

And while Francois was rolling in other people’s cash, staff of Etic Solutions were treated shamefully.

Former employee Jenny Byrne revealed that Francois refused to pay mileage or overnight accommodation when she was working for him.

“You were lucky to get paid,” she said.

And she says she asked herself: “How do we have these lovely offices without a client base; there was no pressure to get revenue in.”

After the Spotlight programme on BBC1 tonight, one investor who has been talking to donegaldaily for six months told us: “I know donegaldaily reported he had a criminal record and seeing it now on TV has brought home just how evil Francois really is.

“I can’t thank donegaldaily enough for exposing this man. I’ve lost my money, but thankfully no-one else will be conned now.”