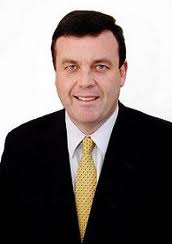 Dr McDaid: “I am deeply saddened by today’s news. It has still come as a bit of shock even though he has been battling cancer for the past year and half.

“Brian was our shining star and we looked to him to get us out of the demise that he was in.”

The Fianna Fáil deputy leader and former finance minister was just 52. He was diagnosed with pancreatic cancer in December 2009.

He died in the early hours of the morning at his house in west Dublin and is survived by his wife, Patricia, their two children, his mother, and three brothers and one sister.

Brian Lenihan had a strong family tradition in Fianna Fáil. His father, Brian senior, was a leading figure in the party for many years, while his grandfather, aunt and brother were also Fianna Fáil TDs.

“He always worked for his country and he worked for the best of Ireland and I suppose in the end what anybody in public life would wish to do, and that’s what he did.

“I just feel my life has almost ended, I really do.”

“Brian Lenihan was exemplary in the carrying out of his public duties.

“He continued a long line of representation for Ireland in public life by both his father (Brian) and grandfather (Patrick) and his family in general,” he said.

“He exemplified a great sense of humanity in the public representation he gave.

“I’d like to say I’ve known Brian Lenihan for many years and regard him as a friend in politics,” he added.

Fianna Fáil leader Micheál Martin said: “Brian has fought a brave and courageous battle with a serious illness over the past 18 months.”

“In all of this time, Brian never once flinched from his public duties and he showed an unceasing and untiring commitment to tackling the economic crisis facing this country.

“Even when receiving debilitating treatment, Brian continued to work assiduously in the best interests of this country. For Brian Lenihan, that was always paramount.”