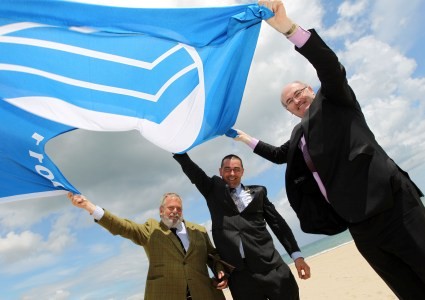 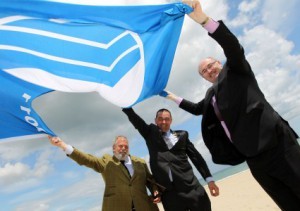 DONEGAL’S 12 Blue Flag beaches have retained their status for another year, Environment Minister has announced.

The Blue Flag programme has been operating in Ireland since 1988 and in the years since then, the Blue Flag has become a highly respected, internationally recognised eco-label of huge significance to the tourism sectors.

The tourism sector was targeted in the Government’s recent jobs initiative which saw a reduction in the VAT rate from 13.5% to 9% on a range of tourism-related products and services along with other incentives.

Referring to the commitment in the Programme for Government to improve the tourism product, including the development of events focusing on water-based recreation, the Minister Phil Hogan remarked that the value of good quality bathing water to the tourism industry cannot be underestimated.

Speaking at a ceremony in Wexford, the Minister noted that the award of 84 Blue Flags equalled Ireland’s best ever performance when 84 Blue Flags were also awarded in 2006.

Minister Hogan remarked:  “This increase is very welcome and is due to the combined efforts of the Local Authorities and coastal communities on the ground as well as those in the wider catchment who are playing their part in working to improve water quality.”

“Water-based tourism has increased ten-fold in the past ten years and these awards are important for the continued growth of this sector.”

He said Bundoran in particular benefitted and will host the European Surf Championships this September as a result.

“People are coming here from all over the world to surf,” he said.