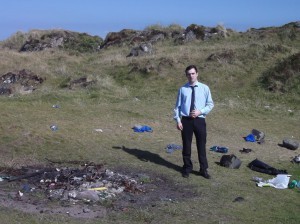 To move follows a spate of dumping across the county – especially in Inishowen.

One of the region’s best-known beaches, Sweet Nellies beach in Greencastle, was left in a mess recently following a beach gathering which saw litter strewn around the beach and even bonfires being lit.

Cllr Jack Murray says he has spoken to the council’s litter warden who has informed him that a number of fines have been issued to those responsible for the littering.

“Last week I was contacted by a Greencastle resident who was concerned about the state of Sweet Nellies Beach.

“Upon visiting the beach, I was disgusted to see litter and clothes strewn everywhere. There was also a number of scorch marks which had been caused by bonfires.

“I reported this issue to the council and asked that they investigate in order to protect our beaches.

“I have since spoken to the council’s litter warden who has confirmed that the litter has been removed and a number of fines have been issued to those responsible,” he said.

He also revealed that the council is considering other measures to protect Donegal’s beaches including installing surveillance cameras and erecting more signage warning about illegal dumping.

The recently-elected Sinn Fein councillor said he welcomes any move that will protect Donegal most natural asset.

“Large numbers of tourists will be visiting the northwest in the near future for events such as the City of Culture and Clipper Race in Derry. This will be an opportune time in showcase Inishowen’s beaches. They are our greatest asset in attracting tourism.