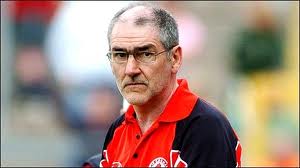 HARTE AND KERNAN EXPECT MURPHY RED CARD TO BE REVERSED

TWO GAA stalwarts have today called for Michael Murphy’s red card against Cavan to be overturned….and one of them is Tyrone manager Mickey Harte.

He has been supported by former Armagh all-Ireland winning manager Joe Kernan.

Murphy’s appeal will be heard tonight in Croke Park by the Central Competitions Control Committee.

“I have no doubt Michael Murphy will be back (for the game against Tyrone),” said Mickey Harte.

“It appears it was a harsh sending off, so I would expect he will be back,” said Harte.

And Joe Kernan insisted: “The offence for which referee Martin Duffy issued the ultimate sanction looked relatively innocuous — more a push than anything else, I would have thought.

“While Donegal will be making strenuous efforts to have the red card overturned, there is always the fear that the Competitions Control Committee will support the referee’s stance meaning that Murphy will have to serve his sentence.

“Yet there are very few people, including many in Cavan I am sure, who would wish to see Murphy denied the opportunity to lead his team out against the reigning provincial champions.”