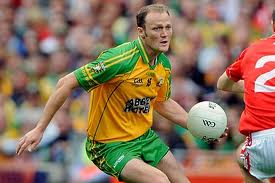 SUPER DONEGAL KNOCK TYRONE OFF THEIR PERCH TO WIN IN CLONES

DESPITE some dreadful Tyrone tactics and poor refereeing decisions, a gritty Donegal today knocked Tyrone off their perch – and booked a place in Ulster SFC Final against Derry.

In an action packed game at Clones, Donegal’s Colm McFadden – arguably playing the best football of his career – was the Tir Chonaill man who took a superb goal in the second half to set up the win.

And although Tyrone equalised with just seconds of normal time left, the brilliant Dermot Molloy sealed the win with a fantastic goal in injury time – winning 2-06 to 0-9!

There were wild celebrations among the Donegal players and fans among the 20,000 fans at Clones.

All across the park Donegal were men against boys, Neil McGee and Karl Lacey were superb.

And Jim McGuinness may have been criticised for his tactics, but his tactics worked superbly today.

“I’m delighted for all the players but we have to focus now on the final,” he said calmly afterwards.

In the 53rd minute Donegal were denied a clear penalty when the referee penalised McFadden for over-carrying when he was clearly rugby-tackled from behind.

Kevin Hughes was sent off in the 61st minute for punching a Donegal player and the referee had no choice but to send off the Tyrone player.

It was more than deserved – Tyrone had been commiting foul after foul, pulling jerseys and hitting Donegal players high.

For all their dominance in the first half, Tyrone led by just two points 0-6 to 0-4.

Veteran Owen Mulligan opened the scoring for Tyrone but Mickey Harte’s side were reduced to taking long shots at goal as Donegal put men behind the ball.

By the 11th minute Tyrone were three points up as Philip Joran hit over from 40 yards.

A couple of minutes later and it was 0-4 to no score as Brian Dooher pointed from all of 35 yards.

It took 17-year-old Patrick McBrearty to get Donegal on the scoresheet when he hit a superb point from a tight angle against the breeze – and 30 yards out – in the 16th minute.

However they hit two more points from Cavanagh and O’Neill.

With Donegal five points adrift, it was looking bad for the Donegal lads.

But with three minutes left to the break Donegal began something of a fightback. McBrearty won the ball, passed to Kevin Rafferty who hit a superb point from all of 35 yards.

When McFadden scored a point from a free just after the deficit is reduced to just three points – 0-6 to 0-3.

Tyrone moved forward but after beating back a Stephen O’Neill effort on goal, Donegal swept forward and Kevin Cassidy pointed to leave it 0-6 to 0-4 at half time.

And Donegal came roaring back in the second half – bagging two goals…to finally knock Tyrone off their perch.