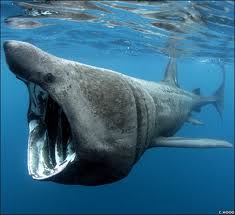 Experts believe a cooling of temperatures in waters off the coast has led to a lack of the huge creature’s main supply of food – plankton.

However members of the Inishowen-based basking shark study group say they are not concerned.

In fact, the group says the sharks’ absense since the beginning of the summer is a major scientific breakthrough.

The group, led by shark expert Emmett Johnston, say the unusual lack of shark sightings proves there is a dramatic change in temperatures in the Atlantic Ocean.

“We’ve had a lot of ups and downs this year; we had really dense aggregations of sharks in April a whole month earlier than usual, then pretty much no large groupings throughout May and June.

“And now we are seeing jellyfish species and Sunfish in Inishowen waters 4-6 weeks before any previous records.

“We have always advocated the basking shark as a fantastic indicator species for monitoring global climate and ocean change and this year we have proven it,” he said.

Although initially disappointed with the lack of shark activity the scientists quickly understood that the strange goings on offered a perfect comparison to previous ‘normal’ year’s records.

Emmett went on to say “Having a good hunch or theory is one thing but being able to robustly prove it to the scientific world is another.

“Obviously we hoped for hundreds of sharks but in hindsight we should have actually been wishing for what we got this year, which was little or no activity, because that has provided us with a robust set of figures to prove what marine biologist’s have been discussing for the last 50 years”.

Researcher Donal Griffen from Queen’s University in Belfast said the findings are fascinating.

“It sounds complicated but if you can imagine a cross section of the ocean like a sandwich of layers, each layer has a different density and different temperature.

“Normally we get a higher temperature at the surface than the underlying main body of water but this year the surface of the ocean has been cooler than normal but the Atlantic as a whole has been warmer and it’s this difference that has given rise to the 4- 6 week difference in animal’s movements”.

The team believe the ongoing studies on the basking shark are vital to discovering and monitoring the links between Irish waters and the wider Atlantic Ocean.