DOUGHNUTS, BURNT-OUT SPEED VANS AND FLASHING HEADLIGHTS – HOW MUCH HAVE WE REALLY LEARNED?

The line of cars flash their headlights momentarily as they travel at a noticeably slow speed on the road out of Buncrana. 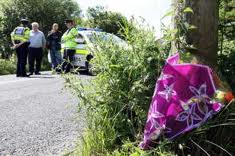 A quick flash in return acknowledges the tip-off of the presence of a speed camera van in the vicinity.

It’s a busy Friday evening on the Inishowen Peninsula.

In a few days time it will be the first anniversary of Ireland’s worst ever fatal car crash which claimed the lives of eight people on July 11th last.

Depending on who you ask, life on the peninsula has changed drastically since that fateful evening on the outskirts of the tiny village of Clonmany.

The statistics will show that Donegal’s roads are indeed a safer place with less than half the deaths year on year.

Others will say that attitudes to road safety are still nonchalant and another multiple car crash is literally just around the corner.

There is no denying that July 11th last year was a wake-up call for the tightly-knit communities in this most northerly peninsula. 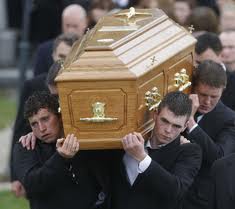 It’s more than just a job, it’s a vocation.

He knows that deep down he will not change the attitudes to the car culture which exists across Inishowen and Donegal in general in a matter of months.

He knows it all about education and taking responsibility.

“The bottom line is that everyone who gets behind a wheel now has to take responsibility to create a safer driving environment.

“Take for example the flashing of lights to warn other motorists about speed vans or Gardai. That might seem a cool thing to do.

“But the fact of the matter is that the same person you warn about speeding could be speeding an cause a crash the next day. It’s as simple as that,” he said.

Education has been a huge factor over the past year with everything from road safety colouring competitions for younger children to hard-hitting Road Safety Roadshows for teenagers.

But Eamon admits that short-term, it’s the ‘in your face’ approach that is helping to reduce incidents of dangerous driving and fatalities across Donegal.

“Education is a long-term thing and it is something that Donegal County Council has and is investing in.

“But we know we must try to prevent a repeat of last year’s awful tragedy.

“That’s what the high presence of Garda checkpoints and speed cameras across the county has done. It’s a necessary enforcement and I have no doubt that is why there is a reduction in the number of crashes and deaths at this stage,” he said.

It was a lack of Garda manpower on the ground at the time of the crash which led Inishowen’s coroner Dr John Madden to publicly declare that motorists were driving dangerously because there was little chance of them being caught.

But while attitudes towards the culture of car racing and dangerous driving may have changed, the anti-law feeling is still rife among some

On April 9th last a speed camera van operator in Inishowen had to flee for his life when two youths set the van on fire on the Main Carndonagh to Quigley’s Point Road.

The operator of the ‘GoSafe’ vehicle had to jump out of the burning van but not before the arsonists were caught on the van’s cameras setting it alight.

An investigation into the incident is still ongoing after Gardai identified the van spotted at the scene of the attack. 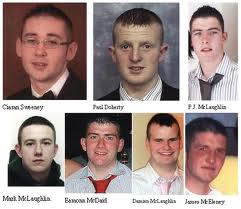 Deputy Padraig MacLochlainn was Mayor of Buncrana and a county councillor at the time of last July’s horrific crash.

The Sinn Fein politician knew the families of most of the eight people who perished in the crash.

He said there is no question that a huge amount of work has been done in the wake of the disaster which has left its scar on the people of Inishowen for generations to come.

“I remember the wakes and the funerals of the young lads and of Hughie Friel, the pensioner coming home from bingo, as if they were yesterday.

“It was just an awful time for the people of Inishowen and for Donegal. The funerals just seemed to come in waves. When one was finished, another one started.

“Nobody wants to ever go through that again,” he said.

He said the countless efforts by the local community to tackle the culture of extreme driving have made a difference.

He points to the recent Road Safety Conference held in Buncrana held by the local community, the Road Safety Authority and the Gardai.

Amongst those in the audience were members of the eight families left bereaved by last July’s tragedy.

The hard-hitting seminar heard how Donegal’s road safety record was “appalling” with 307 deaths and more than 1,200 serious injuries between 1996 and 2009.

It also heard how speed was a factor in two out of every five deaths during that period and that 28% of those killed in those years were young men between the ages of 17 and 24.

Statistics unveiled at the conference also showed how Donegal accounted for 6% of all the country’s road deaths during that period despite only having 3.5% of the population.

The RSA’s chief Executive Noel Brett said however that there was no question that things are improving in Co Donegal and pointed to the Donegal Road Safety Working Group as being to the forefront of road safety in the country.

Deputy MacLochlainn said he wanted to stress that while he did not think Donegal had become an overnight shining example of successful road safety, it was not for the lack of trying.

“When we have people like Eamon Browne, the Road Safety Officer, working with the community, then you know things will happen.

“The Donegal Road Safety Working Group are doing a thankless job but it is only through their work that we can swing the odds in our favour,” he said.

But he is also well-aware that another disaster is just another dangerous bend or dip in the road away.

“Unfortunately that’s the reality, not just here in Donegal, but across the country.

“Thankfully we have been lucky in that there has been no multiple deaths in Donegal since the tragedy last year.

“But I am a realist and I know all it takes is a wrong decision or for someone to do something stupid and we could have a repeat of last year all over again,” he said.

Meanwhile the only survivor of the crash, Shaun Kelly, 23, the driver of the VW Passat in which the seven young men were killed, has now been interview by Gardai.

The file was forward to the Director of Public Prosecutions for review and the Gardai are refusing to comment any more on the case at the request of the bereaved families.

Come Monday those same families will have to relive their living nightmares all over again as they mark the first anniversary of the tragedy.

No one memorial mass has been arranged with the eight separate families preferring to mark the occasion in their own person way.

Local priest Fr John Walsh said it will be a very trying time.

“It will be a very trying time – especially for the parents of these young men who never really ever get over the los of a child,” he said.

But even the church in Donegal, in its own spiritual way is trying to do something positive to help safeguard its young drivers.

A unique blessing of cars will take place later this month to coincide with the feast of St Christopher, the patron saint of travel.

All those who choose to get their cars blessed will be asked to commit themselves to safer driving.

“Presumably, if people want their cars blessed they’ll also want to stay safe and do nothing that would contribute to carnage on the roads,” said Fr Walsh.

DOUGHNUTS, BURNT-OUT SPEED VANS AND FLASHING HEADLIGHTS – HOW MUCH HAVE WE REALLY LEARNED? was last modified: July 11th, 2011 by Stephen Maguire