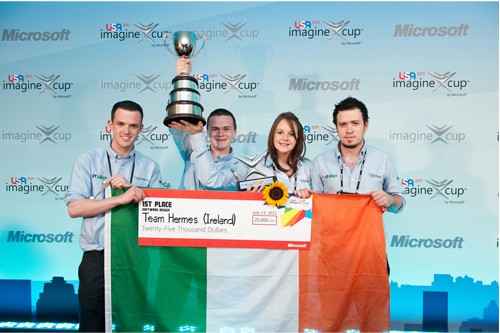 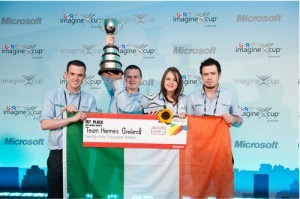 BY MARIE DUFFY: A Donegal student has led a Sligo IT team to a world technology prize.

“Team Hermes” from IT Sligo designed a device that plugs into a car and monitors dangerous driving behaviour and road conditions, providing instant feedback to both the driver and the car. They won a prize of $25,000 (€17,622).

The results of the annual Microsoft Imagine Cup were announced in New York last night.

James McNamara of the Sligo team said: “We have a problem in Ireland; that problem is deaths on our roads.” He said that, thanks to the scheme, his team had been able to come together to solve this problem and save lives.

Minister for Innovation Richard Bruton said today the team’s victory is an inspiration to the country.

“These young students used modern technology and some new thinking to help solve the long-standing problem of our unacceptably high level of road deaths. It shows how new technology can help solve old problems potentially
in any area of life,” he said. “It also confirms to me that Irish people can compete the very highest level when it comes to creating technologies that can solve complex problems and create viable businesses.”

S Somesagar, senior vice president of the company’s developer division, said those who compete in the event had developed “an inspiring spectrum of projects, raising the bar higher and higher each year”.

“We are in awe of the students’ solutions for addressing social and real-world challenges, and want to help them take their projects to the next level with the financial, technical and business support they need to change the world.”

Teams will be eligible to apply for grants that include a combination of cash, software, training, consulting and other support. Further details will be announced later this summer.