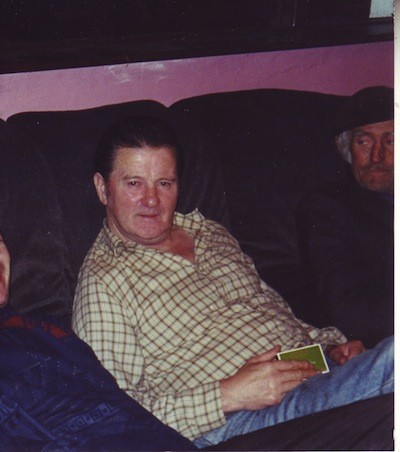 GARDA detectives have confirmed that they have launched a new investigation into the disappearance of a 64-year-old man in Dungloe eight years ago.

James left his home at Cois Locha in Dungloe on July 16, 2003 and despite a massive garda operation, he his whereabouts remain a mystery.

A native of Min Charraic, James lived alone at his lakeside home. He was last seen collecting his pension in Dungloe on Wednesday July 16th.

Gardaí are keen to speak to a man who rang Mr Curran’s sister Madge Coyle, stating that they had given him a lift in his car following his disappearance.

Inspector Sylvie Henry at Glenties Garda Station said today: “I am particularly interested in talking to a man who rang Madge and stated that he had given a man fitting Mr Curran’s description a lift around the time of the disappearance.

“We are unsure what kind of vehicle this man was driving. I want that man to come forward. We are also interested in speaking to anyone else who may have given Mr Curran a lift in the Dungloe, Gaoth Dobhair, Gortahork or Falcarragh region.”

The single man didn’t drive, had difficulty walking and relied on buses and lifts to get around the area, often getting lifts to his sister’s home in Bloody Foreland.

Gardaí are also keen to speak to any bus drivers who may have seen Mr Curran getting on a bus during this period which was before the 2003 Mary from Dungloe Festival.

Gardaí said that they are keen to ascertain hard facts in relation to this case and urged the public to disregard any previous rumour and speculation that surrounded this case.

Gardaí urged anyone who has any information to contact them at the incident room in Glenties Garda Station at 074 95 51080 or the confidential garda line 1800 666 111.

All this information will be treated in the strictest of confidence.

Gardaí are particularly interested in hearing from donegaldaily.com readers abroad who may have information on the case.

Said sister Madge: “Someone out there has to know what happened to him. He can’t have just vanished. Someone has to have seen him or spoken to him.

“He would never have spoken much in the last ten years but if you spoke to him he would talk to you. You couldn’t describe him as thin and he was a little taller than me which would have left him around 5’3.”

His grand-niece Brid Mhic Phaidin said: “He just didn’t vanish into thin air. Someone must know. You cannot help but find his disappearance suspicious. If he fell into a ditch we would find him. If anyone out there has anyone information about what happened to him we would like them to call us.

“We would also like anyone who rang or spoke to us initially to call us back. If we had to search in the morning we do it all again. We don’t believe he is alive, he is gone too long for that, we are his family and we knew him and we know that he wouldn’t just disappear.”