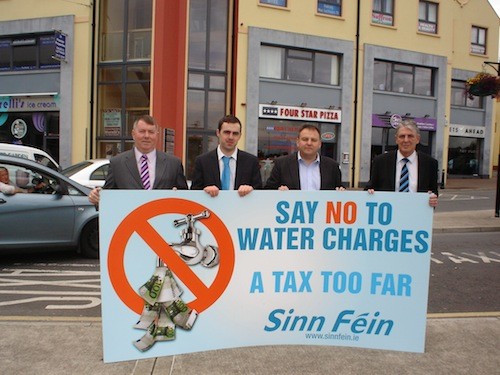 Donegal North East Sinn Féin has launched a campaign in opposition to the Government’s proposed introduction of water charges.

“We are also erecting billboards across the county voicing our opposition to the charge.

“People cannot afford another charge on top of the money they are already forking out. Families are already struggling to pay the Universal Social Charge, Levies, PRSI, increased fuel bills and mortgage increases.

“It is also a nonsense to suggest that water charges are about water conservation when almost half our water is lost every year in Donegal through leaking pipes due to years of under investment.”

He concluded: “Councillors of all parties recently supported a Donegal County Council motion calling on the government to abandon this inequitable taxation. We now need to unite against this government and state loud and clear that the people of Donegal will not stand for this”.