A young Letterkenny man has been jailed for six years after lighting a fire which almost caused a massive explosion at a local pub. 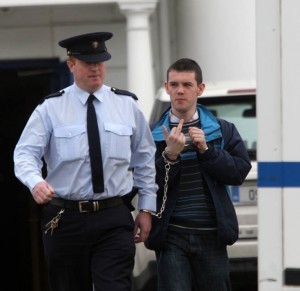 John Gibson, 22, stole a car which he set on fire outside the Ard Ri pub in the Killylastin area of Letterkenny on June 15th last year.

The flaming car caught the side of a gas mains at the pub which caused more than €6,670 of damage.

People living close to the pub had to be evacuated by the emergency services as it was feared the gas mains would explode.

Gibson had earlier stolen a van and a car from Glenard Park and was captured on CCTV committing the robbery.

The van, which belong to a local carpenter, Patrick McMenamin, had more than €7,000 worth of equipment in it.

Gibson, who had 43 previous convictions, was found sleeping along with two others in an unoccupied house in the Sallaghraine area by Gardai.

A Nintendo DS which was also stolen from the house in Glenard Park was found at the scene.

Judge John O’Hagan said burglaries are one of the worst crimes as people feel like their homes have been raped after they have been burgled.

He said break-ins to homes make the owners feel like their “castles” have been violated.

“One of the most horrible things is for a person to have their house broken into.

“It is an intrusion into his castle and leaves them feel as though their house has been raped.

“That’ serious but that’s how they feel – that their personal goods and sense of privacy has been violated,” he said.

Gibson wrote a letter to the judge saying how sorry he was for his actions.

He said he had never had a relationship with his father and was going to be a father for the first time himself in five weeks time.

“I want to be there for the first time when it walks and talks,” he said.

However Judge O’Hagan said that he has tried to do his best for Gibson in the past.

“I know Mr Gibson and he knows me. I have tried manfully to cope with him and give him as many chances as I can – I regret it has failed,” he said.

He sentenced Gibson to a total of six years and suspended the last two years.

And he warned that if he came before him again he would be facing a much longer jail sentence.