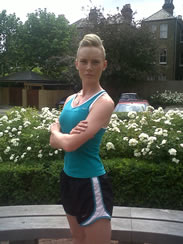 And she heaped yet more heartbreak on Cheryl Cole by rubbishing reports that love rat Cole is yearning to get back with the Girls Aloud star.

Collette – once a second lieutenant in the Irish Army – said: “Without saying too much I could guarantee that he probably isn’t, unless I’m hearing fibs.”

Asked about her dates with Cole, she added: “I can’t say I’ve never met him or that we’ve never been out together because clearly there are pictures of that on different occasions.”

The 26-year-old was first snapped with Cole in May as they climbed into a car outside London’s posh Maddox Club.

Brainy Collette, who has a history degree, also appeared on Sky Sports’ Soccer AM show earlier this year as a sexy “Soccerette” dressed in a Chelsea strip.