A pub owner who welcomed Government Ministers and other VIPs to Donegal’s famous MacGill Summer School this week is fuming after she was told she is facing a €5,000 for not having a proper smoking area. 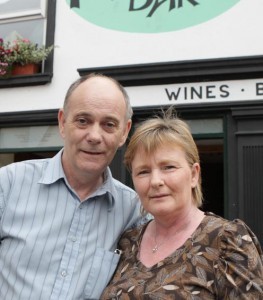 Carmel Doherty of Keeney’s Bar in Glenties was left outraged after she was hit with the fine and told to close her smoking area on Thursday afternoon.

The same smoking area has been operating at the pub for the past 10 years and has been visited by numerous environmental health officers who passed it.

The theme of this year’s summer school, which ended yesterday (FRI) was ‘The first 100 days – The next Five years.’

However Ms Doherty said the country is now being strangled by legislation when small business should be encouraged.

The businesswoman has also been serving sandwiches and baguettes to MacGill Summer School crowds but was also told to stop because her kitchen was too small.

The bar does operate both a food and drinks license.

She became so angry that she put a sandwich board outside her premises to protest at the fine. 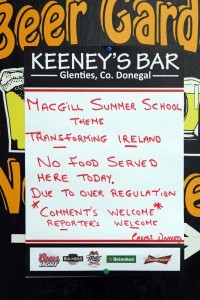 The sign reads “No Food Served Here today due to over regulation.”

Ms Doherty said she and her husband are not sleeping because they are trying to find ways of getting the money to pay the €5,000 fine.

“Just up the street we had the Taoiseach and Government Ministers trying to find out ways of getting the country back on track.

“And here I am being fined up to €5,000 because of fussy laws when I am trying my best to get by.

“I have just paid a VAT bill of more than €4,000 and it’s no secret that pubs are struggling to get customers in.

“This smoking area has been passed by numerous health environmental heath officers over the years but now they claim it is not good enough and have said I am facing a €5,000 and ordered me to close it down,” she said.

She added that she now had no choice but to tell her customers to smoke outside the front of her bar.

“Glenties was the first national winner of the National Tidy Towns competition and it is a beautiful town.

“But my customers will be left with no option but to stand out at the front door and throw their cigarette butts onto the street when we have a perfectly proper smoking area out the back.

“For me that just doesn’t make sense and it’s bureaucracy gone mad,” she said.

A spokesperson for HSE West said they do not comment on individual cases but that all smoking areas are governed by legislation and conditions introduced in 2004.