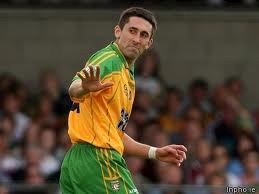 19mins Cassidy puts it wide when there were better options.

SECOND HALF OF EXTRA TIME: Donegal lose breaking ball from throw in.

1 min of injury time: Karl Lacey pulls a point back with a great score. Kildare 0-13, Donegal 1-08. Whistle blown. Jim McGuinness is on encouraging his troops in the middle of a huddle.

10mins. Kildare are 3 points ahead.

8mins Kildare are 2 points ahead. White scores from free.

6mins: Kevin Rafferty has chance to equalise, but puts it wide. Doyle back on for Kildare.

8.04PM Players are still in the dressing room catching their breaths after a pulsating second half.

Donegal and Kildare were all square at full-time.

Donegal were much the better side in the second half, turning around a two point deficit from the first half.

But Kildare pulled three points back to level the game, scoring the equaliser just 20 seconds from the end.