LIQUIDATOR CALLED INTO THE MILLBRIDGE

Another well-known Donegal restaurant has hit hard times after a liquidator was appointed to the Millbridge Bar and Restaurant in Kilmacrennan. 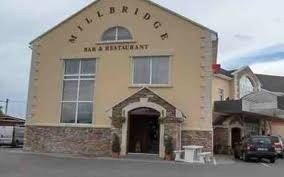 The premises has been closed for the past two weeks.

A creditor’s meeting took place in the Clanree Hotel in Letterkenny on Friday.

The premises includes a large bar and lounge and a fully-fitted restaurant.

It is the latest business to suffer from the recession with a number of other premises due to close in the coming months.

It follows confirmation last Friday that 15 Donegal properties on NAMA’s property books including two gold courses, a nursing home and a number of housing developments.