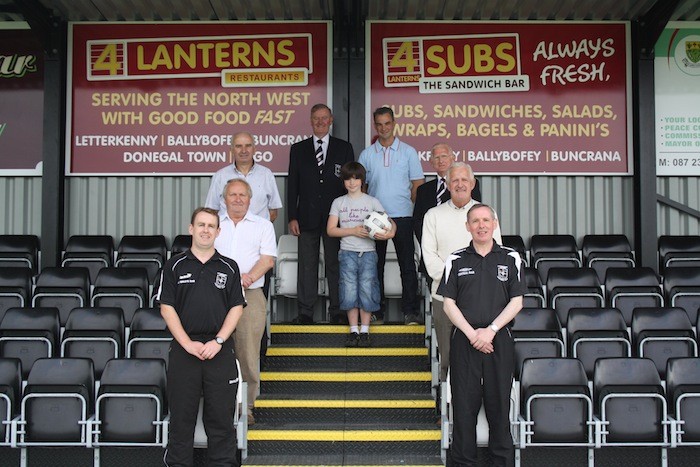 Letterkenny Rovers legends will step onto the hallowed turf at Leckview Park this Saturday night for a special occasion to mark the official opening of the new 200 seater ‘Four Lanterns Restaurants’ stand (7pm).

FAI Chief Executive Officer John Delaney fresh from attending the World Cup draw in Brazil will be the guest of honour to perform the official duties along with Pat Duffy from the Airtricity League and Letterkenny Town Council Mayor, Gerry McMonagle.

All 200 patrons who joined the sponsor a ‘Seat for Life’ campaign – which has raised €20,000 towards the cost of the impressive new stand – have been invited to the opening in recognition of their contribution and to the after match reception upstairs in The Central Bar.

Both team line-ups are sure to provide a who’s who from the Letterkenny Rovers history books. The respective team managements will include Highland Radio’s Charlie Collins, who captained the club to back to back Donegal League titles in the 1980’s, former senior team manager and town postmaster Ed Margey and Honorary member and former Irish schoolboys international Gerry Meehan.

The opposing dug-out is equally impressive consisting of one of the county’s most decorated players and a League of Ireland Championship winner, Eunan ‘Busty’ Blake, his brother and club President Liam Blake, and James Barclay, who as well as being a Rovers stalwart for decades, played for Finn Harps in their first game in League of Ireland football.

The two teams will be captained by current committee members Paddy McDaid – who captained Rovers to their first Ulster Senior League title in 2005 – and Diarmaid Doherty, a former secretary and trustee of Leckview Park. Patsy Collins, the longest serving member of the current senior management team, will be assisted by Michael Duffy with the kit and medical needs.

To coincide with the legends match, an underage blitz will be ongoing on the practice pitch involving the local schoolboys clubs from Glencar, Ballyraine and Illistrin along with the host club. There will also be some half-time entertainment as the legends catch their breath!

Commenting ahead of the night, club chairman Dessie Kelly said it would mark a special occasion for the club.

“We have decided to play a match consisting of past players from various teams over the years. I’m sure it won’t be too serious but it will be nice to see a few old faces back out on the pitch again which is looking in great condition. Also, to have John Delaney from the FAI coming to open the stand is a major boost particular in such busy period for him as he has just returned from the World Cup draw in Rio and it is international week with a match against Croatia coming up”.

At the end of last year, the club launched an innovative sponsorship programme involving the entire community in Letterkenny to help finance the building of the new stand.

The sponsor a ‘Seat for Life’ campaign offered the public the chance to have one of the seats named after them for a once-off fee of €100 and set in stone their recognition to the club for life.

“This project was a big undertaking for the club in the tough economic climate and we are delighted to have completed it successfully, said Kelly this week. “The response we got from the people of Letterkenny and beyond has been magnificent. Past players, supporters, the general public and business community all got involved and supported the campaign and we are greatly indebted for their generosity.”

The after match reception will take place upstairs in the Central Bar where the €1000 seat draw will be held as well as the club’s annual €10 draw which has a first prize of €3000.