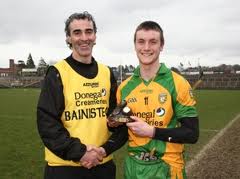 GLENTIES star Leo McLoone will be included in the squad for Donegal’s All-Ireland Senior Football semi-final against Dublin at Croke Park on August 28th.

McLoone missed the Ulster final against Derry after fracturing an eye socket in a club clash.

The dreadful injury came as he returned to the game after breaking an ankle in March.

He has featured for only about 40 minutes in the Championship so far.

McLoone played against Cavan and Tyrone but missed the opener against Antrim and the wins over Derry and Kildare.

Donegal team insiders are also confident that Christy Toye will also be in the squad after his super-sub role against Kildare.

He scored a goal just second after being brought on, and added a point to finish as his side’s top scorer.

Toye has endured a two-year battle to recover fitness from an achilles tendon rupture.

Murphy did not start the All-Ireland quarter-final against Kildare because of a niggling hamstring while Kavanagh and Rafferty were both doubts for the game, but did play.

The captain is now said ti be very fit.

GAA: BOOST FOR DONEGAL AS McLOONE DECLARED FIT FOR DUBS CLASH was last modified: August 9th, 2011 by admin
Tags:
mcloone back for donegal