The 2011 ‘Taste of Donegal Food Festival’ kicked off last night with something to suit everyone’s pallet. 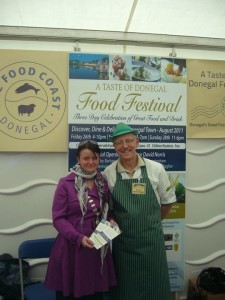 The event is a three-day in the Diamond, Donegal Town, will display of a range of food and top class cuisine which will be on offer to visitors and those attending the event.

Much of the produce on display will be from a number of local companies.

The official opening of the event which is now in it’s third year- will take place by the Chairperson of Failte Ireland North West Berni Butler.

Motorists are advised that free parking will be available for those attending at the mart car park, at the Abbey Vocational school and at the Four Masters GAA grounds.

A number of local hotels, B&Bs and restaurants are also offering special deals including meals and accommodation to celebrate the event.