People have been warned about killer deer stalking the hills of Donegal. 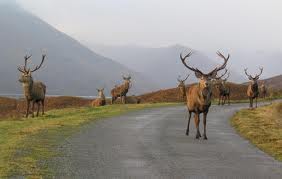 Huge male stags will come down from their normal mountain habitats in the coming weeks looking for female partners to mate with.

And an expert has warned that vicious stags can kill if walkers and ramblers and other members of the public are not careful.

Liam Nolan of the Irish Deer Alliance pleaded with people to be careful coming up to September when stags are most active.

“Normally these stags and other deer stay up in the hills away from the flies and from the females in winter and spring.

“But they come down around this time coming up to September looking to mate with females.

“These are very large animals and people should treat them with caution if they come across them in public.

“I want to warn people that one brush with a sharp antler could mean death,” he said.

He added that drivers should also be careful about driving in rural areas where deer inhabit including Donegal and Kerry where there are large herds of red deer.

Mr Nolan warned motorists that if they are in an accident with a deer or stag they face paying their own repair bill.

“Because nobody owns deer in Ireland as a matter of law people are not insured if they hit one.

“Apart from the fact that it’s a very dangerous situation, people will have to pay for their own repairs,” he added.

Mr Nolan also warned the incidents of poaching of deer also increase around this time.

“Poaching deer is illegal and you will find a lot of this takes place at night time with lamps around this time when the deer come down from the hills.

“This is of course illegal and we would ask people who know of poaching to contact the Gardai,” he said.