COUNCIL TO UPGRADE WEATHER PLANS AS ANOTHER FREEZING WINTER FORECAST

Donegal is to brace itself for a repeat of last year’s freezing winter temperatures including huge falls of snow. 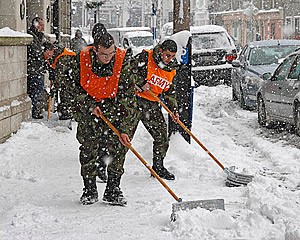 That’s according to the latest long-range winter weather forecast which is predicting more of the same for the coming months.

Both Donegal County Council and a number of town councils including Letterkenny are already making provisions to cope with the big freeze.

Last year salt and grit reserves dropped to critically low levels as temperatures also plunged to a record minus 16 in some places.

Reserves got so bad that Donegal County Council was forced to limit salt and gritting to just primary road routes while many secondary routes remained untreated for days.

The situation left many rural householders virtually trapped in their own homes for days on end because the road conditions were impassable.

Councillors have already discussed this winter’s situation and have ordered extra allocations of salt and grit.

Extra storage facilities have also been sourced to store the salt.

Letterkenny Town Council has discussed the matter on three occasions and have ordered two snow ploughs to have on standby.

Other machinery, normally used to cut grass, will also be fitted with snow clearing equipment.

More than 100 salt bunkers will also be located across the town.

Other towns including Buncrana, Donegal Town and Falcarragh are making similar plans.