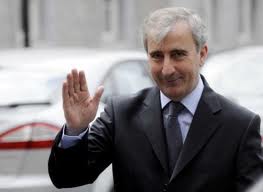 The man many believe could be Ireland’s next President has revealed how his journey began in Co Donegal.

Fine Gael’s Gay Mitchell revealed how a friend first mentioned it to him at a wedding here on June 5th last.

“I hadn’t given it serious consideration but I began to think about it more and more on the journey home from Donegal.

“I spoke with my family and then I decided to speak to a number of colleagues about seeking the party’s nomination.

“I suppose, yes, you could say the journey began in Donegal – at a wedding,” he said.

Mitchel said he has already given up many of his Ministerial pensions but never made any public announcements about it.

He added that he did not have an issue with taking a salary if he is elected President as he has to live like everyone else.

The withdrawal of a number of high=profile candidates including David Norris and Gay Byrne leaves both Mitchell and Labour’s Michael D Higgins as the two main contenders in the race for the Aras.