ONE HUNDRED BEDS CLOSED IN HOSPITALS AND NURSING HOMES ACROSS DONEGAL

More than 100 beds in hospitals and nursing homes across Donegal have been closed due to cutbacks, new figures have revealed. 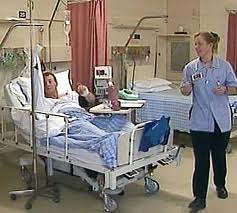 The figures from the Irish Nurses and Midwives Organisation show the amount of bed closures in Donegal since it started compiling the figues in 2009.

A total of 29 beds have closed at Letterkenny General, 20 at Lifford Hospital, 17 at St Joseph’s Hospital and 14 and Dungloe Hospital.

While not directly contesting the INMO figures, the HSE says it’s not in a position to publish accurate figures on bed closures.

A nationwide audit is underway, to ensure all hospitals are using the same criteria before they can say definitively how many beds are affected.

The HSE hasn’t given an indication of when this audit will be completed but it is not expected this year.

ONE HUNDRED BEDS CLOSED IN HOSPITALS AND NURSING HOMES ACROSS DONEGAL was last modified: September 3rd, 2011 by Stephen Maguire