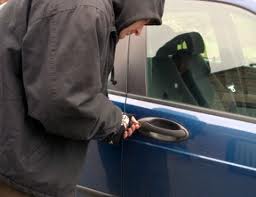 THIEVES are targeting cars at every opportunity, gardai in the county have warned, as they investigate the latest incidents.

Last month GAA players at the Four Masters club in Donegal town were hit as were tourists visiting An Grianan fort.

The month before that a woman visiting her husband’s grave had her car raided.

And the latest victims are members of Greencastle golf club in Inishowen.

But this time there was a twist – the crooks came armed with a jack and made off with four alloy wheels from a Toyota!

It followed thefts from vehicles in Letterkenny and Muff.

There have been so many incidents in Inishowen however that gardai are investigating the possibility that the same gang has been behind all the incidents there in recent weeks.

A garda spokesman said: “Our advice is simple to every single motorist. Do not leave any valuables of any kind in your vehicle while you are away from it.”

He admitted however that the theft of wheels was an escalation in the incidents.