Winking weatherman John Eagleton was forced to apologise to thousands of people across Donegal – after he got the outcome of Hurricane Katia wrong. 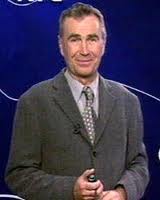 The well-known RTE forecaster told listeners to Highland Radio at 10.15am that winds had peaked.

But Mr Eagleton was forced to come back and apologise when power was knocked out to thousands of homes – including the radio station on which he made his prediction.

More than 4,000 homes across the region lost power while trees were blown down across Donegal in Convoy, Glenties and on the Inishowen Peninisula.

Mr Eagleton said he could not explain the sudden change in weather.

He said the weather devices at Finner Camp showed winds were gusting at 56 knots and Malin Head which was gusting at 110kmp.

He graciously came back on air and apologized to listeners for his earlier prediction.

“What can I say – I can’t t stop the winds. The general figures are pretty steady there for the past couple of hours. There is a pressure surge but I can’t see it getting dramatically worse.

“I apologise if I said there would be no power outage. If the whole of Donegal or the whole North West is out then that’s different.

“The stats are still showing no major increase through the morning time but it’s not going to get any worse than it is now.

“Perhaps the devices at Finner Camp is stuck at 56 knots,” he laughed.