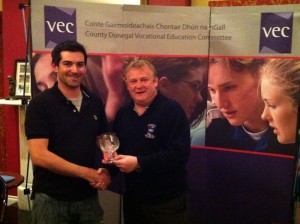 This years captain, Cllr Dessie Larkin, decided to use his big day as a vehicle to raise some much needed funds for Letterkenny General Hospital’s Breast Cancer unit.

Winner on the day was popular society member Paul Mc Ginley with a quite remarkable score, given the conditions, of 37pts.

The win was further enhanced by the fact that Paul travelled up from Kilkenny so as not to miss the society’s big day. Runner up on the day was Moville’s Johnny Sweeney on 34pts with Carrick’s Gareth Doherty third on 30pts b.o.t. Also joining the prize-winners were the captain himself, Dessie with 30pts b.o.t. closely followed by PJ Mc Gowan also on 30pts b.o.t. 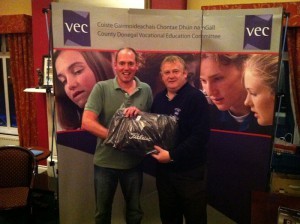 The captain had the privilage of inviting a few guests to take part in the competition on the day. This proved to be a very competitive section with Diarmaid Doherty coming out on top with another 37pts of the highest order.

The Past captain’s prize was won by Declan Collum, closest to the pin by Martin Gallen and longest drive by Johnny Sweeney.

After surviving the round and being battered by the elements, the society sat down to an excellent meal in the golf club after which Cllr Larkin presented the generous prizes, thanked all who helped and informed the gathering that over €600 had been raised for the charity. 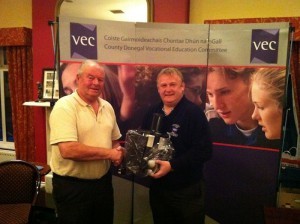 The society’s next outing is the annual Sean O Longain Inter-schools team competition in Portsalon G.C. on October 15th.

This will be the third staging of this keenly contested event with the spoils going to teams representing Finn Valley College, Stranorlar for the past two years. 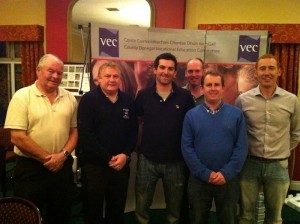