Two well-known Donegal men are behind a unigue initiative between Google and Newstalk 106-108 fm to produce the most interactive Presidential Debate ever held in Ireland. 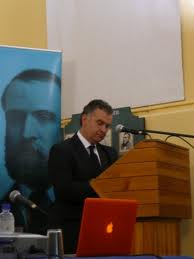 The debate will empower citizens like no other and will put their concerns and issue to the forefront.

Damien Kiberd will moderate the 90 minute debate on Monday 24th October where all seven candidates will be subject to questions that have been submitted and voted on by the general public.

Garrett Harte from Raphoe will co-ordinate the Newstalk input into the debate while Letterkenny man Damian Blake will oversee the Google end of things.

Ireland’s first truly digital presidential debate, which will be the final public debate before the Presidential Election on Thursday 27th October, will be broadcast live from Google’s Dublin offices at 12pm on Newstalk and on YouTube.

Prior to the debate, the general public will be asked to submit potential questions for the candidates via youtube.com/newstalk and the most popular questions will be put to the Presidential hopefuls during the debate.

Speaking at today’s announcement, Frank Cronin, CEO of Newstalk 106-108 fm, said: “This innovative style of debating will give the Irish electorate the opportunity to raise the issues that matter most to them.

“Newstalk is committed to ensuring that the voice of the Irish nation is represented and this debate will allow the public put its questions to the candidates.

“Through this partnership with Google, Newstalk is driving electoral debating into the modern age by giving Irish people at home and abroad the opportunity to interact with candidates and participate in a real way in the debate.”

A number of special digital features will further enhance the Newstalk Google Presidential Debate and enable listeners and viewers to get involved throughout the duration of the debate. These include:

· Live online feedback from listeners and viewers, including video interaction with listeners in Ireland and abroad through Google+ Hangouts, i.e. live video chats for up to 10 people which will be incorporated into the debate.

· Live up to the minute analysis of reaction to the candidates during the debate online and on social media websites.

Natasha Sachs, Debate Coordinator, Google said “We are pleased to partner with Newstalk on this endeavour. Google is committed to educating voters on the key issues in this election and empowering them to have a voice in this critical conversation with candidates.

“It has been 14 years since the last presidential election, and in that time advances in technology has made it possible for Irish voters to engage directly with the Presidential candidates online. We’re proud to help facilitate the opportunity for voters to have their voices heard.’

All seven candidates have confirmed their participation in the debate and voters are being urged to submit their questions for the presidential hopefuls now, by posting video and text questions via youtube.com/newstalk.