BREAKING NEWS: The Donegal man found unconscious outside a licensed premises in Derry has died in hospital, police have just confirmed. 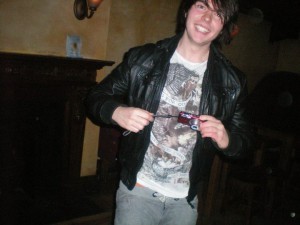 Caolan Page, 19, was found with serious head injuries on Magazine Street in Derry city centre around 2am on Saturday morning.

A statement from the PSNI a short time ago confirmed that Mr Page from Upper Kildrum, Carrigans, has passed away at Altnagelvin Hospital

Police are still refusing to say if they believe Mr Page was attacked or if his death was a tragic accident.

“Police are still investigating the circumstances of the incident,” said a PSNI spokesman.

He added that anybody who was in the vicinity of the area and noticed anything suspicious to contact them.

Caolan, a former pupil at St Columb’s College in Derry, was a hugely popular young man.

Tributes have been flowing in for the tragic 19 year old on a Facebook set up especially after the incident.

It had been reported that Mr Page had died yesterday after being found unconscious and being rushed to hospital.

However it is now understood that he was kept a live on a life-support machine.