CUSTOMS REMOVE MORE THAN 17,000 LITRES OF FUEL AFTER SWOOP ON DRUMKEEN PETROL STATION

Customs officers seized more than 17,000 litres of fuel following a raid on a petrol station in Drumkeen yesterday. 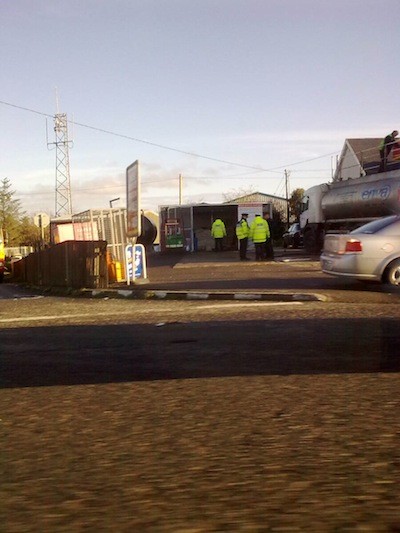 Officers from the Revenue Commissioner’s office visited the Drumkeen Service Station at Callan on the N13.

The officers used specialist pumping equipment to remove 7,700 litres of petrol and 9,700 litres of diesel which they took away in storage vehicles.

A spokesman for Revenue confirmed to Doneagdaily.com they carried out an operation at the station which lasted more than three hours.

Officers dressed in high visibility jackets swooped on the petrol station and served the owners with a warrant for unlicensed trading.

The spokesman said a consignment of fuel was taken away and will now be examined.

“This premises was visited and a warrant was executed for unlicensed trading.

“A large volume of both diesel and petrol was removed and this will now be examined.

“Part of this process will be to examine if any of the fuel uncovered contained laundered fuel,” he said.

No arrests were made during the operation.