The body of a woman has been recovered from the sea off the pier at Teelin in south Donegal this afternoon. 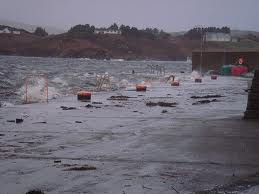 It is understood a car with one occupant went off the pier shorlty after 2pm.

Gardaí at Glenties, who are investigating the incident, have said they cannot comment on the matter at this stage.

However foul play is not suspected.

The woman’s body was taken to the morgue at Letterkenny General Hospital.

A source revealed “It does appear at this stage that it was an accident and Gardai are not looking to speak to anybody about the matter.

“However they are looking for anybody who might have been near the pier at Teelin at the time the car went into the water to contact them.”

The age or identity of the woman has not yet been revealed.

It is believed her relatives have been contacted about the tragedy.

Saturday’s U-21 County Final which was to feature Kilcar and Naomh Conaill at O’Donnell Park in Letterkenny has been cancelled as a mark of respect to the dead woman.