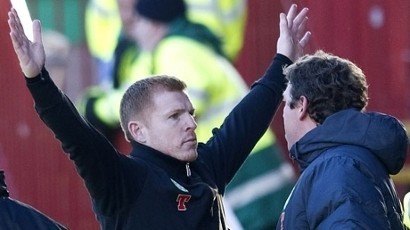 THE HOOPS REPORT: CELTS OUT OF EUROPE BUT HEADS HELD HIGH 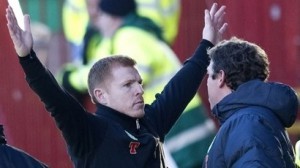 FROM NEIL DOHERTY IN ITALY: Celtic played one of their best games in Europe since the Martin O’Neill era – but familiar refereeing on Italian soil robbed them of a place in he last 32 of the Europa League.

The Hoops played their part in a thrilling 1-1 draw at Serie A high-flyers Udinese, and could have won it had the referee given a blatant penalty.

But just like away to Juventus a few years ago, the referee got it wrong. On that occasion that referee gave a penalty against Celtic that left the world of football stunned.

Gary Hooper had opened the scoring inside 30 minutes with a close-range tap-in that was cancelled out on the stroke of half-time by €20M-rated Antonio Di Natale.

In the second half Celtic hit the post, keep Fraser Foster was stunning – and then there was a blatant handball in the Udinese box which the referee didn’t see (or didn’t want to see).

“I was very proud of the team, everyone made a fantastic contribution and with a bit of luck we’d be through,'” Lennon said afterwards.

“I thought there was a clear handball, I though it hit one of their centre-backs on the arm, we hit the post, we had one cleared off the line…

“In terms of chances it was was almost as good as we’ve played. To come away from home, to Italy of all places, and play like that was good to see.”

Fraser Forster made a string of fine saves and Lennon likened the on-loan Newcastle man to a former Hoops favourite.

“We had Artur Boruc a couple of years ago and in Forster, I think we’ve found another one like that. There were some top-class saves. You need your goalkeeper like that,” he added.

Celtic bow out of Europe once again – but there were signs tonight that this team is starting to fight again.