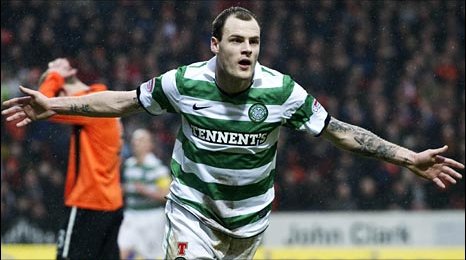 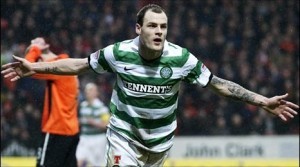 FROM NEIL DOHERTY IN GLASGOW: ANTHONY Stokes scored a hat-trick in the Scottish Cup today to show why Ireland could do with him on the plane to Euro2012 in Poland and the Ukraine.

Club manager Neil Lennon was delighted with the goals which came in a potentially tricky game away at Peterhead.

Stokes tapped in Celtic’s first after 36 minutes, then hit two after the break, while Ki Sung-Yueng crashed a shot against the crossbar.

Said Lennon afterwards: “Anthony can tidy up his game. He’s only a young man yet he’s been around a while. He’s got so much potential.

“He could have had six today. Some of his link-up play was not great but he always gets a chance in a game.

“He is a goalscorer. He’s a great lad and he’s having a great season and we want him to continue that.

“He creates a lot for himself. He worked really hard for the team today and it was a good all-round performance.”

Asked about his chances of playing for Ireland this summer, Stokes himself would only say: “I would of course like to be given a chance, but I will just do my very best for Celtic and see what happens from there.”

Lennon also revealed that Southampton have made an enquiry about striker Gary Hooper but said that was “as far as it went”, before adding that he was not looking to sell any players, “especially not my leading goalscorer”.

Midfielder Joe Ledley was forced off with an eye injury and was replaced by Victor Wanyama but Lennon is confident the Welshman will be available to face Dundee United at Celtic Park on Saturday.

“He got a cut eye on the eyelid from an elbow which I wasn’t altogether pleased with, but the referee deemed it to be accidental,” added the manager.