SADNESS AS ‘THE GIRL FROM DONEGAL’ BRIDIE GALLAGHER DIES 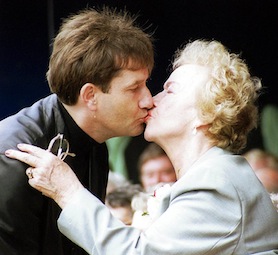 Ms Gallagher, who inspired many major acts including Daniel O’Donnell and Paul Brady, died at her home in Belfast aged 87.

Ms Gallagher, who was born in Creeslough and known affectionately as The Girl from Donegal, shot to fame in 1956 with her recording of A Mother’s Love’s A Blessing.

She also had a huge hit with her rendition of The Boys From County Armagh.

As well as having her own show on RTE radio, Bridie played London’s Royal Albert Hall, Sydney Opera House and Carnegie Hall in New York.

She also featured in a television documentary about her life before Christmas on UTV called Bridie The Girl From Donegal.

Singer Margo said “It’s just so sad even though I know she wasn’t well of late. I have so many great memories of her.

“I was so happy to be involved in the tribute for Bridie. She touched and influenced so many people. I hope she rests in peace.”

A spokeswoman for the Post Office in Creeslough said they had learned of Ms Gallagher’s death with much sadness overnight and said the entire village had been saddened by the news of her passing.

Her life was tinged with sadness when in 1976 her 21 years old son Peter was killed in a motorbike accident.

“She never really got over that but she just kept going,” said another son Jim.

In July 2010, the people of Creeslough remembered her by unveiling a plaque in her name while Donegal County Council also gave her a civic reception.